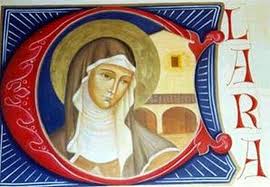 St. Clare born in 1194, was the daughter of prominent nobility. Before her birth, it was revealed to her mother that her child would be a brilliant light in the world. Clare was a beautiful girl, possessing a good personality and a brilliant mind as well. She was generous to the poor, and prayed often, delighting in praying before the Blessed Sacrament. As a young girl she even wore a coarse penitential belt under her clothing.

At the age of 18, she heard Francis preach in Assisi during Lent in 1212. His words resonated in her heart and she knew God was calling her to lead a life of penance, similar to Francis’. She met with him to share her insights and feelings. She so longed for a life of poverty, penance and prayer. Clare knew the impact her plans and desires would have on her family, and she realized she would have to leave home in secret. She did so on Palm Sunday, at night, and was met in a little chapel called Our Lady of the Angels (Portiuncula) by Francis and his companions. She consecrated herself to God, received the coarse habit, and the Order of Poor Ladies was begun.

After a brief time with the Benedictine Sisters, Clare was moved to the convent at San Damiano, and remained there in the cloister for the rest of her life. She was the first woman to write her own rule for herself and her Sisters. It was a result of 40 years of her lived experience of contemplative life and was approved by Pope Innocent IV in 1253. St. Clare received the document of approval as she was on her deathbed. 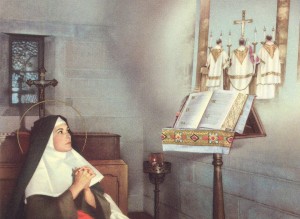 Her life was one of poverty, and of service to her sisters and all who came to the monastery, seeking prayer and counsel. The Second Order grew rapidly in Clare’s time, and among her first followers were her own sister and her mother!

Through her life of self-denial and seclusion and deep prayer, Clare found much happiness and fulfillment. She died in 1253, and was canonized in 1255. Her feast day is on the 11th of August. In 1958, St. Clare was chosen as the Patroness of Television. This was because of an incident in her life where she was able to view from her sick bed in the monastery, the Christmas Mass celebrated in the basilica of St. Francis.

Today, there are Monasteries of St. Clare throughout the world, each one autonomous, yet united in the spirit of poverty and sisterly communion. Clare wished that her sisters remain united with the followers of Saint Francis and today, the brothers and sisters from the three Franciscan Orders still draw inspiration from the bonds which united Francis and Clare in the thirteenth century! The daily life of a Poor Clare combines the joy and simplicity of the Franciscan call within the framework of a MONASTIC, CONTEMPLATIVE, COMMUNITY.

Triduum and Feast Day Mass in Honor of Saint Clare

Please Note: The chapel WILL NOT be open to the public for the Triduum and Feast Day Mass this year due on the advice of medical authorities. All three evenings and the Feast Day Mass will be live streamed on our web site: www.poorclarepa.org.

The links for each evening & the Mass are to the left and below on this page. They will also be available for viewing after the events.