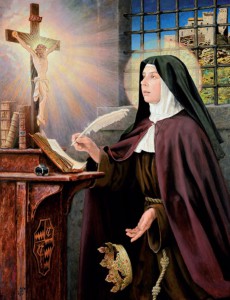 St. Camilla Battista was born into nobility in Camerino, Italy on April 9, 1458. As a princess in the home of her father Duke Giulio Cesare da Varano she grew up in the court and received a good education.

Around the age of 9 she listened to a sermon on Good Friday preached by Domenico of Leonessa, a Franciscan friar who later became one of her confessors. He ended his sermon by encouraging his listeners to shed one teardrop for the Passion of Christ. She resolved to show her love for Jesus by shedding a tear each Friday. Though not initially drawn to the spiritual life, she persevered in her vow and would squeeze out a tear before running off to play. She found a booklet that contained a meditation on the Passion of Christ divided into 15 parts to be prayed like a rosary. She began to pray this devotion each Friday while on her knees before a crucifix. Other spiritual practices like fasting and night vigils began to attract her even though she continued to spend time in the youthful pursuits of court life.

During Lent of 1479 a sermon she heard touched her deeply inspiring her to take a private vow of chastity. Her father initially opposed her desire to enter religious life as he wanted her to marry. She decided would enter the Poor Clare monastery in Urbino. Her spiritual life deepened during the two and one half years before she actually entered the monastery.  She wrote Lauda (Praises) during this time – a work in which she expressed the joy she felt in knowing that Jesus loved her.

On November 24, 1481 she entered the Poor Clare monastery in Urbino and made her profession in 1483. Early in 1484, she transferred to the new Monastery of Santa Maria Nuova at Camerino which was close to her father’s castle. Her father had made arrangements with the pope and the vicar general of the Friars to have her moved there. She was reluctant to do so and went only under obedience.

While living in the monastery in Urbino, she experienced visions and composed several other spiritual works. She was elected abbess in 1500. The following year, due to political disagreements, her father and her brothers were killed and she was forced to flee to the Abruzzo region until 1503 when she felt safe to return to Camerino. She founded a monastery in Fermo and trained a monastery of nuns in San Severino Marche who adopted the Rule of St. Clare. She died at the age of 66 on March 31, 1524 in the monastery in Camerino.

St. Camilla Battista was canonized on October 17, 2010 by Pope Benedict XVI. You can view the Letter written by our Minister General, Fr. José Rodríguez Carballo OFM on the occasion of her canonization by clicking the link below:

A Light for Our Time

Bret Thoman OFS, has translated St. Camilla’s writings from Italian into English. The book is titled From Princess to the Foot of the Cross. It is available from Bret Thoman, OFS or from Tau Publishing.
Bret Thoman OFS
P O Box 143
Senoia GA 30276
770-402-4335
St. Francis Pilgrimages

The table of contents is listed below:

Holy and Blessed Trinity,
You granted Camilla Battista the ability
to live as a true daughter of the Father,
to adhere to the Gospel of our Lord Jesus Christ,
and to allow herself to be molded
by the fire of the Holy Spirit.
Give me the grace to imitate her example,
and to make also of my life
a reflection of her beauty
and of her sanctity.

Grant me,
through the intercession of Saint Camilla Battista,
this grace that I ask
(here state the favor you are requesting)
Our Father, Hail Mary, Glory be…

Due to the guidelines of the Archdiocese and the size of our chapel, we are only allowed limited capacity. In our chapel only 3 pews on the left side and 4 pews on the right side will be available for seating. Within the pew, please observe 6 feet between households.

You must wear a mask before entering the chapel and use hand sanitizer. Masks must remain on in the chapel during Mass.

No Hymn books and the singing will be modified.

There will be NO DAILY PUBLIC MASS until further notice.